How to save Rhinos – our fun journey so far

Starting on the 30th July and running throughout the summer until the 9th October, a crash of rhinos has been invading the streets of Exeter and the English Riviera! The Great Big Rhino Project was created to raise awareness of the dramatic decline of the rhino population around the world and Bigwave media have been involved in a number of fun and creative activities to support it.

Bigwave Media teamed up with Paignton Zoo and the Great Big Rhino Project to sponsor a rhino and have run a host of Rhino related activities to join in the fun.

Here’s a roundup of our activity to date.

We love a team challenge, so for a staff training activity, we decided to task #TeamBigwave with producing a design for the rhino that we would sponsor. Before beginning our staff training collaboration, we learnt all about why and how the rhino has become so threatened. Pippa Craddock, Director of Marketing and Development at Paignton Zoo, visited us to explain that the rhino will not survive without massive and urgent action. There are only around 28,000 rhinos left inhabiting the world and this is primarily due to poaching – a rhino horn is now worth more than gold.

So with the incentive to help the rhinos, #DontHackIt was born! Staff were split into teams, assigned a Rhino related name and tasked with creating a proposal – read the full story of the #DontHackIt project here!

Once the idea of our Rhino was born, Faru needed to be brought to life. Graffiti artist Miss C was selected as our chosen artist and she set up camp in the Exeter Harlequin Shopping Centre, where the general public could watch the creation of Faru from a plain white sculpture, into a vibrant green, swirly patterned piece of art.

The Great Big Rhino Trail then launched with a procession on the 9th July 2016 through Exeter high street. A number of Bigwavers turned out to cheer them along and to look out for Faru. With all the rhino’s looking their best and a huge crowd turnout, we’re sure that artists felt like all their hard work had paid off! After the procession, all the rhinos took a little #RhinoRoadTrip down to Paignton Zoo in the build up to the beginning of the Great Big Rhino Trail.

Since the launch of Faru, there have been many other events and activities to keep us all occupied. We’ve been out on the Great Big Rhino trail, we’re running competitions galore, have a dedicated Faru web presence and Faru has her own social channels.

Faru now has her own web page. It includes all the important information especially that of the colouring in and find Faru competitions, info on where she is located and her social media information.

To promote Faru we have, not one, but two competitions.

The ‘Find Faru’ competition requires you to find Faru on her webpage, those that find and click on her can then enter a special competition. Easy as that! The prize includes a family ticket to Paignton Zoo and a cuddly ‘Stella’ Rhino – who wouldn’t want that?

If creativity is more your ‘thang’ then you can enter the colouring competition: 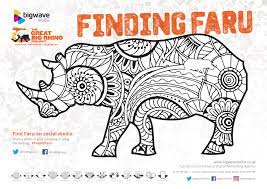 – simply download a colouring in sheet, put pen to paper and post it on Facebook or Twitter with the hashtag #FoundFaru. The winning entry will also receive a family ticket to Paignton Zoo and a cuddly ‘Stella’.

Follow Finding Faru on Twitter and Instagram – and if you are Exeter bound then don’t forget to find Faru and show us your selfies, with the hashtags #FindingFaru #FoundFaru!